CHRISTA | “How to Butcher a Whole Chicken”

Christa and I met at the old Four Seasons tearoom…or was it the lobby at One King West? Obviously, my memory of the exact location is blurred, but I remember Christa vibrantly. The publishers of my magazine had asked her to come in for an interview. She had a degree in journalism and a history of working in unrelated jobs. She was from Florida, spoke fluent German, was into the culinary arts, and was at once shy and hot-headed, funny and sweet. She, Joe and I made an awesome team.

We spent countless days and nights debating the appropriate usage of commas and yelling at each other about word choice—over drinks and a helluva lot of laughs. 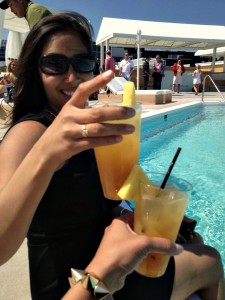 Christa was one of the first people I told that I was pregnant with you. I knew she’d forgive my former slam-talk about babies (pretend you didn’t hear this darling) and would understand that it was, in fact, an another example of the Lonelle Syndrome—that is, the tendency to say the first and most extreme thing that comes to mind in any given situation, despite (and perhaps because of) the complete inappropriateness of it. She totally got that this move was truly an awesome thing for your daddy and I.

So, here is your lesson from Christa. I should have expected her to do something food-related, but somehow, did NOT expect something as brutal as ‘butchering a whole chicken’.

I bloody love it. Thanks Chris. I can’t wait for   Sebastian to grow up and know you even better.