DANIEL “How to Hail a New York Taxi”

Daniel is a New Yorker, born and bred. He’s also our cousin–by marriage–to the shining light that is our beautiful Leora, and dad to the lovely, bright, and vivacious next gen of cousins, Natasha and Mikayla.

We first met about 15 or 20 years ago when Daniel and Leora were both agents at ICM (or was it William Morris?) I guess there must have been a romantic connection, but I didn’t really know anything about it until a few years later when I went to New York to stay with Leora and realized that Daniel was around a bit too often to be just a friend. One morning, he made us insanely good omelettes for brunch it was quickly obvious that he was a keeper. 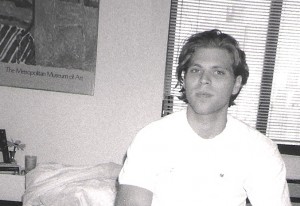 And he could match Leora’s brand of cool with quick wit and a series of ready jokes.

As I said before, Daniel and his family are properly from the city. His gorgeous parents, Julia and Jerry and sister Louise (who used to be and maybe still is an auditor of big rap stars…) are totally brilliant and amazing people to be around. They exude that real New Yorkiness that few can honestly claim in a city that’s poured into by masses of people around the globe trying to ‘make it there’.

I suddenly realize Sebastian, that your mommy is not the type of person who asks what you’re working on when she hasn’t seen you in ages and, I guess, your cousin Daniel is not the guy who volunteers updates, however–I do know a few cool things about Daniel’s career that stand out in my mind and have reached me through the family gossip mill. Daniel was the executive producer on the hit heist film “Inside Man” starring Denzel Washington, Clive Owen and Jodie Foster and directed by Spike Lee; as well as“Righteous Kill” with Robert De Niro and Al Pacino (which is super cool if you know anything about the great actors of the past generation or two…or three.) I also know he produced Novocaine with Steve Martin (in case you grow up to be a fan of his particular brand of humour–see: The Jerk.) And now he’s working on some branded online shorts that I think you’re also going to like–stuff your mommy thinks is really cool and the storytelling of the future. Oh, and he also has TV show coming out this year on Bravo called “Odd Mom Out.” I think we’d better make a note to catch that one.

Since Leora taught me how to tell a cab driver where you want to go so it seems like you’re from New York (ex. 51st Street between 7th and 8th), it’s only fitting that Daniel teaches you the proper way to hail a taxi!

But, the most important thing you need to know about your cousin Daniel though, is that he’s a good guy and he likes you a lot. At your cousin Natasha’s bat mitzvah this past weekend, you reached out to him and wanted to be held–something you reserve for only your really favourite people. And he was so focused on you and so excited to hold you that he tipped his whole glass of whisky on the floor without even realizing it. 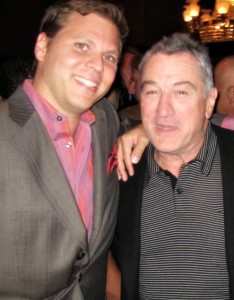