RAJI “How to Lead a Fruitful Life”

When Raji showed this video to her mom, she said she felt like it was the first time she’d revealed the ‘weird’ side of herself to someone other than me (and your Auntie Shantha.) And somehow, I find that difficult to believe. It seems impossible to me that Raji’s mother–or anyone else who’s ever met your Raji Aunty–wasn’t already entirely in the know about her weird side.

And by weird, what I mean is that she’s an artist; someone who sees possibility in everything, potential in the mundane, ordinary objects waiting to take the shape of something beautiful.

I mean, a dreamer. A person who is never satisfied to stand still, always looking for ways to spin the world into a different shape.

And I do mean, weird. Weird in the way that every conversation takes an unexpected twist. Every thought she has comes from a totally other dimension that she’s the only one to have ever visited. I mean that hanging out for the night can mean anything from painting nude models with chocolate to sitting in the cafe/store around the corner, brainstorming about ideas until we cry laughing amidst a selection of very non-emotional, too cool media types going about their day.

These are just a handful of the many many things I love about Raji and also, I guess, the things that make her weird.

We met at The Spoke Club–a private media and arts club downtown that had a great bunch of members and a rooftop patio to die for. For a while, it was my home away from home and I worked and partied there in equal parts. Raji was the Cultural Curator for the club and I came on board to work on some special social media projects. It was great fun and it was great work: a rare combination–though one I’ve been fortunate to experience quite often.

Two summers ago, on our way up to a friend’s cottage, Raji mentioned to your dad in casual conversation that she owned a Vespa PX125, a model born in the early 80s…1982 to be exact. It also happened to be the dream scooter of your dad’s mod-immersed youth. And the best part: it didn’t run. So, Mark–itching for a project, specifically to build/rebuild/repair/spend time with a vehicle of this design–volunteered (in the form of begging) to bring this old girl back to life. Raji accepted with the stipulation that it be match fit for TIFF, happening three months later.

Watching Mark work devoutly and soulfully on this beast, day in and day out while I basked in the hot summer sun was an incredible experience for both of us. It seemed that basically everything that could go wrong in a Vespa of this age, had gone wrong: it was perfect. In three months your dad repaired the gearbox, replaced the electrics, installed a new exhaust, replaced the starter, fixed the signals, the kickstarter and a million little things that had him singing for an entire summer and part of the fall. In the end she ran perfectly, despite the fact that Raji hadn’t anticipated that the ’82 was a big lug of a scoot. That is to say, not entirely the type of Vespa you zip elegantly over to the film festival in wearing heels and couture. Nevertheless, it was an awesome thing and it sealed the friendship of your aunty and your dad.

One day a few months ago Raji shut up shop and decided to move back to her family home in Vernon, BC. Now, from what I hear of Vernon, it’s small town glory at it’s finest. The type of place that everyone who was raised there can’t wait to leave–until the day when they miss its comfort and return to the town for a respite, finding its arms wide open to receive them.

Adding to this romantic scene, Raji’s family are orchardists–meaning that they run and cultivate a large farm filled with apple trees. 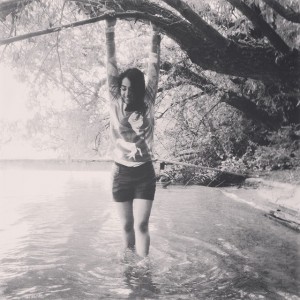 So a free spirited Raji went home to her loving, if strict, Punjabi family to regroup; to insert fresh energy into her fashion label Aujla; and to gather some perspective allowing for the conceptualization of the next steps for this larger than life human.

Your Aunty’s video lesson pays a tongue in cheek tribute to her cultural heritage and shares the biggest lesson you’ll ever learn: How to live a good and fruitful life, by being true to your deepest self. It sounds easy, but figuring out who you really are and what you really want are a lifelong exploration. And when you do finally begin to figure out what your dreams are you have to summon the strength of self to grab onto them and not let go. Just like your Aunty Raji.